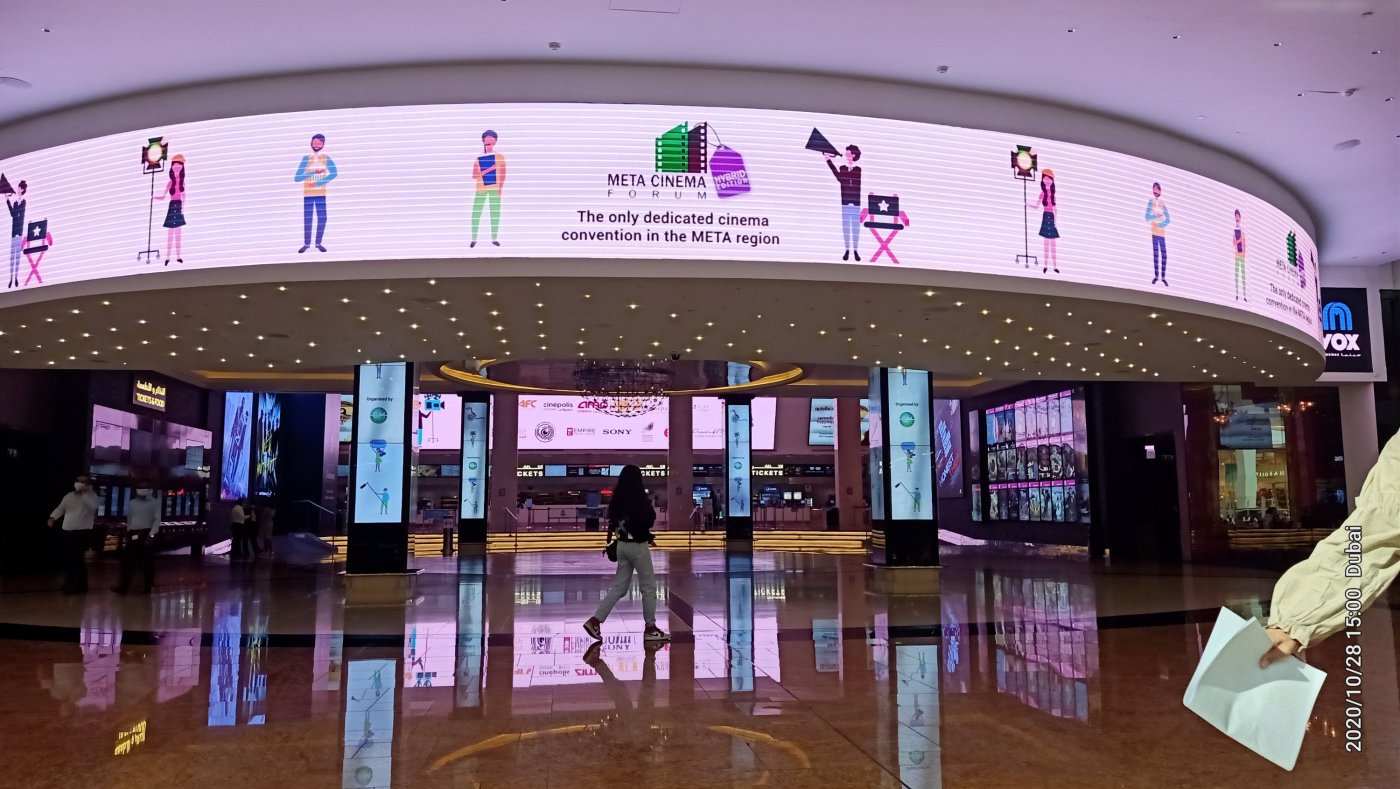 .
The third edition of META Cinema Forum, which took place on 27 – 28 October 2020 at VOX Cinemas, Mall of the Emirates concluded on Wednesday with an awards ceremony followed by a post-event networking dinner for some of the industry’s leaders in the region.

The awards which are quantified by ComScore Movies, the global leaders in media data were presented by Rajkumar Akella, General Manager, India Comscore Movies and Nena Loncar, Senior Client Operations Executive, Comscore Movies. The award for the Highest Grossing Movie of the Year went to Joker and was received by Roy Chacra, Managing Director at Shooting Stars and the Highest Grossing Arabic title of the Year, El Folos,received by Gianluca Chakra, Managing Director of Frontrow Entertainment. The

The Highest Grossing Distributor of the Year was awarded to Empire Films in the Middle East, Serge Zabbel, Business Director at Empire Films received the award, followed by the Highest Grossing Distributor of the Year in Africa being bagged by FilmFinity with Thobashan, Sales Executive at FilmFinity collected the award. The awards concluded with The Hope Award which went to Tenet, Roy Chacra, Managing Director of Shooting Stars was there to collect his second award of the afternoon.

The META Cinema Awards ceremony was followed by a networking dinner, hosted by Farrat at Sheraton, Mall of the Emirates and welcomed some of the region’s most influential faces in the industry.

The two-day hybrid event welcomed over 800+XX cinema experts from around the globe to participate both virtually and physically and was a first for the industry in the region. The event is officially supported and attended by the biggest names in the region including Strategic Partner, VOX Cinemas as well as Pan-African Film Consortium, AMC Cinemas Saudi Arabia, Novo Cinemas, Cinepolis, Cinepax, Starzplay by Cinepax and Filmhouse Cinemas.

Leila Masinaei, Managing Partner of Great Minds Event Management comment on the successes of this year’s hybrid model noting “Although we could not welcome the 1000s of attendees we usually receive at META Cinema Forum in person this year, we are thrilled that hundreds from around the globe, including major Studios and Cinema Exhibitors logged in to take advantage of expertise and lessons learned, as well as plans for recovery for the region, shared by the expert speakers and panelists.”

Masinaei continued “What was even more enjoyable was the level of engagement, continuous questions, and pulling off a true hybrid event, with physical and virtual elements all blended into one to create this unique experience that was hosted at VOX Cinemas, Mall of the Emirates. We are all now looking to 2021, when META Cinema will take place bigger and better than ever and will welcome our global delegates to beautiful Dubai once more.”

The two-day forum was designed to address the current challenges the industry is facing, the content and format has been adjusted accordingly to cater to the needs of the industry.

A notable highlight included a keynote panel discussion entitled ‘Effect of COVID-19 on the cinema industry, projections, plans and visions for recovery and beyond’. The panel discussion was moderated by META Cinema Forum Chairman & Advisor, Jan Runge with the panel made up of industry expert panelists including John Iozzi, CEO and Managing Director, AMC Cinemas – KSA, Maria Gedeon, Marketing Director, Majid Al Futtaim Leisure, Entertainment and Cinemas, Phil Clapp, Chief Executive, UK Cinema Association and John Donnelly, Business Development Director, Dolby Laboratories. The panelists discussed critical topics including the effects the Covid-19 pandemic has had on the cinema industry across the globe and in the META region, future of the cinema industry, market forecasts, operating cinemas within the “new normal”, profitability of cinemas at reduced capacity and most importantly, the road to recovery.

A live panel discussion took place in VOX Cinemas, Mall of the Emirates, entitled META Cinema Insights, the live panel discussion brought together some of the META region’s biggest names in the Cinema Sector for the first time in 2020 to give their insights into ongoing and upcoming projects as well as what each cinema operator has done to survive the pandemic and prepare for the new normal.

The event also hosted a studio slate, a FilmOne Entertainment Product Presentation: From Africa to the World and a special screening of Twisted Blues (2020), directed by Jac Mulder.

META Cinema Forum has established a loyal following from META region’s cinema industry and looks forward to announcing the dates for the 4th edition shortly.

You can have the opportunities for buying,selling,and even renting all Your Items